Alta High School
Soar to a New ALTAtude
We are an inclusive learning community with a tradition of inspiring, supporting, and collaborating with students as they prepare to be engaged citizens in their pursuit of continuous success.

Parents, please remember to use your own email accounts to connect with the teachers during your scheduled time; if you are using your student’s Chromebook, please sign out of their account before the conference.  This will help us to protect student privacy. If you were unable to schedule a time with a teacher for this week’s conferences, please email them directly to make other arrangements.

Alta will be hosting virtual Parent Teacher Conferences on Tuesday, February 23 and Wednesday, February 24. Click HERE for directions on how to reserve conference times with your child’s teachers through your Skyward Family Access. Scheduling will be available Monday, February 16 – Friday, February 19. If all appointments are filled, please reach out to the teachers via email to arrange an alternative time to connect.

During your scheduled conference, you will be able to connect with the teacher via Google Meet. We ask that you use your own email accounts to do so; if you are using your student’s Chromebook, please sign out of their account before the conference. This will help us to protect student privacy. The links you need to Meet with each teacher can be found by clicking here. Please only join when it is your scheduled time with that teacher. Below is a video of this process.

Thank you for supporting your child’s efforts at Alta. We look forward to meeting with you! 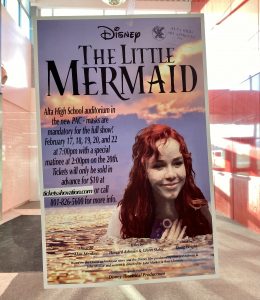 “I wanna be where the people are. I wanna see, wanna see them dancing. Walking around on those — what do you call ’em? Oh, feet.”

If you recently saw a red-headed mermaid with a dinglehopper, a cleaver-wielding French chef chasing a musically inclined crab or a chipper blue and yellow flounder near Alta High School, there’s a good reason why.

Those “performin’ fortunate souls” were among 60 Alta High students who put on the “The Little Mermaid” musical at the spectacular new Performance Art Center on the northwest corner of the Sandy school.

The classic Disney musical was the first performance in the state-of-the-art theater — a trove with treasures untold — which seats almost 1,400 people (and mermaids). The two-year construction project was funded by a $283 million bond approved by voters in November 2017.

“This has been an unbelievable experience,” said Alta High teacher Linze Struiksma, who directed the sea and land creatures. “This has been my favorite show I’ve directed in eight years. We dealt with so much to get here. They’ve had to buoy each other up.”

The seven-show run began last Tuesday, Feb. 16, 2021, and concluded Monday, Feb. 22, 2021. Fortunately for the character Ariel, the lovestruck mermaid who dreamed of exchanging her fins for legs, the dashing Prince Eric fell in love with her every show — despite Ursula’s worst intentions.